I’ve detailed some of my adventures getting a NixOS-Pi3 running on BTRFS-root with subvolumes:

My goal is to get it booting directly from a compressed subvolume (as opposed to booting from the BTRFS root, or from the FAT partition, etc.) – mostly just because I think it should be possible.

However, as mentioned I am still having trouble with a specific scenario:

It looks like u-boot supports zstd decompression, and I have the following in my u-boot config:

Does anyone know why compression would prevent me from booting the second time (after essentially nixos-install --root / && reboot)? It seems to find and read the initrd just fine (I can post some pics of the boot screen if it would be helpful).

I tried the copyKernels setting thinking that may do the trick, but no change in behavior.

Thanks for any help or suggestions. I’ve been tinkering with this for nearly a year now and have just run out of ideas.

A few screenshots of some example boot error screens (right before it reboots and cycles with the same error messages).

OCR of the text (apologize for any OCR errors, I’ve edited it briefly to fix up a few things, but thought it might help future searchers): 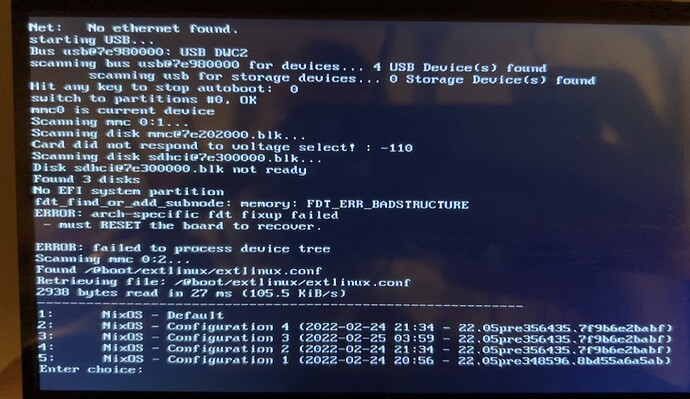 I don’t think nixos actually updates your u-boot. So unless you’re booting freshly built SD images every time, I don’t think adding CONFIG_ZSTD=y to the u-boot package will do anything. Try replacing the u-boot binary manually or making a new SD image

Thanks for your thoughts and response.

I am booting a freshly built SD image to start with, and I’m not replacing the firmware partition (or its u-boot-rpi3.bin file) at any point, so I assumed it would continue with the firmware built with BTRFS and ZSTD support.

It does seem to have references to BTRFS and ZSTD that don’t exist in, for example, the rpi4 u-boot file that also gets included:

As a test, I just ran the below and rebooted, and it failed to reboot – which I assume is because I should have overridden extraConfig somehow.

So it seems like the overlay is working, at least for the initial SD image. I don’t think anything gets overwritten there by default after a nixos-install, but I’ll check that out next.