Should we give a name to nix on non NixOS?

It’s not always easy to refer to Nix when it’s not used in NixOS. Guix refers themselves as “guix foreign” when it’s used outside of guix, it’s clear for everyone, reads well and remove ambiguities.

In my opinion, this would be valuable if we could have a name for Nix on non NixOS

I think nix on non NixOS is succinct enough, but maybe I’m not the right person to judge brevity

I think having too many terms makes it harder for newcomers to understand what’s going on. Especially with things like this, that a newcomer will likely need to understand quite early on.

If we do have one, it should be very obvious. “Guix foreign” is reasonably easy to connect the dots on, but even that might be confusing to a non-native speaker, or someone who works with multiple architectures a lot.

I have a strong and possibly controversial opinion on this. We should set up the entire value proposition and subsequent narrative as follows:

There has already been much debate around this, and it would be great if someone writes down the facts, pro’s and con’s so we have an overview.

Briefly, off the top of my head:

Yes, many of us care to set up their systems like well-oiled machines that are reproducible with a single press of a button. Yet, we have to assume this is not the majority of people who would greatly benefit from learning and using Nix standalone.

Using a term such as “non-NixOS” (which I have seen many times) is problematic in its own right.

I can only imagine where that notion comes from historically, but I think we should move away from that.

I’m fine advertising Nix first and NixOS being a side effect of nix. But when writing guides for doing things with nix, I often have to differentiate how to do something when on NixOS and when not. This adds too many “nix” and “nixos” words in sentences, I suppose this is really confusing

how to do something when on NixOS and when not

I just recently updated the NixOS Wiki Flakes page to reflect that idea:

Assume Nix standalone and add NixOS as a special case.

this is way better! Thank you

Hm, that’s just for differentiation in context of this discussion. I would not actually use that anywhere.

We still have to figure out terminology. See that thread for details and please let us continue the naming discussion on the related pull request directly.

My take on this is that the name itself is not that important, as long as we make a decision.

I proposed Nix Core, but really it can be anything that a user can google.

Nix is the package manager, NixOS is the operating system, what we need is a new name (like Skylark) for the Nix language.

Then we can shuffle all the documentation and marketting material around and things will finally make sense.

Also I agree with @fricklerhandwerk. Our “recruitment stories” should be this:

Arguably the last one is the post polished, I know @Gabriel439 thinks we should emphasize it further. But unfortunately it seems to me that half of sysadmin-land is very conservative, and the other is high as a kite on proprietary cloud stuff which is actively deskilling it. This makes it hard to do as a recruitment channel.

The other "recruitment stories don’t rely on NixOS at all, and indeed that is their entire point — making trying out our ecosystem a much more low friction thing focusing on some existing needs (dot files, don’t just build on my machine) before they fully drink the kool-aid.

when teaching my nix victims (interns)

Nix means it will work on nix in linux (not nixos)

NixOS means it will only work on a full blown nixos systems.

Nix/OS means it will work on the nix in linux and nixos systems. (multi-nix).

the only other way it rename nix in linux (NIL) , so you’d have NIL & NIXOS .

however, i’m not sure about calling ubuntu users NIL’ers… sounds a bit bad ;-).

we need is a new name (like Skylark) for the Nix language.

Yes! We do not need to disambiguate between nix on nixos or not, as the way you enable flakes is essentially the same for both: add a line to /etc/nix/nix.conf, the difference is how exactly the line ends up there, though that is not nix’ concern. If we disambiguate this, then we would also need to disambiguate for about anything that has a module on NixOS.

But indeed, we need a way to better disambiguate between these:

I still like to see “alles” in the nix ecosystem

Nix functions the same on NixOS as on any other platform, so I don’t see the need to rename it.

what we need is a new name (like Skylark) for the Nix language.

Well if Nickle replaces what we have today completely, we sidestep the problem, but so long as the language was have today continues to exist it needs a name.

In my opinion, a good name would be Nixlang.

It avoids coming up with a completely new name, which would make it hard for existing users to actually use it, but it’s different enough to that it would actually matter in eg google searches.

One possible downside is that people still end up using both Nix and Nixlang, like it happens for Go/golang.

One possible downside is that people still end up using both Nix and Nixlang, like it happens for Go/golang.

I think it will be exactly that. IMO in “lang”, the “lang” has no meaning than modifying a word to make it search-engine friendly. In speech and thought, it doesn’t disambiguate, and so we are back where we started. 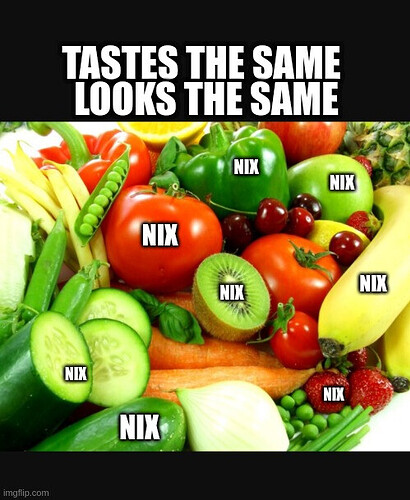 What about naming the Nix Expressions Language “nixel”?

Fun fact, there’s a project for Nix with that name already: https://github.com/kamadorueda/nixel