Use nix in netlify

I am exploring ways to host some of my mostly static websites not on my own server, but “in the serverless cloud”, and am looking at netlify. I am using some small haskell scripts in my build process, and surely enough, their default build image does not have haskell installed.

For reasons I don’t have to explain here I would prefer to use nix to get the dependencies I need. Official nix support in netlify seems to be stalled , and I did not find any hints as to how to work the lack of official support, which surprised me.

Does anyone here use nix as part of a netlify build step?

I guess I could use Github Actions to render the files and push to a branch (or even separate repo), and then host that on netlify. But I’d lose some of the nice features of netlify, e.g. previews for PRs…

I’ve started using Hercules CI Effects to deploy to netlify since recently.
Here’s how: https://github.com/hercules-ci/blog.hercules-ci.com/pull/61/files
It does use the experimental agent 0.9 configuration format, but the effect itself would be the same in 0.8 (stable).
0.9 got delayed so I have yet to do the recursive thing that is blogging about the blog.

Thanks! I see that you pass the branch name to netlify as you push the result, but nothing more. Isn’t there a risk of a race condition? If I push to the repo twice in short succession, and the first build finishes after the second, will the wrong one be live?

nixos.org seems to use GitHub actions and there are PR previews:

Others have had success using portable nix in the netlify builder: 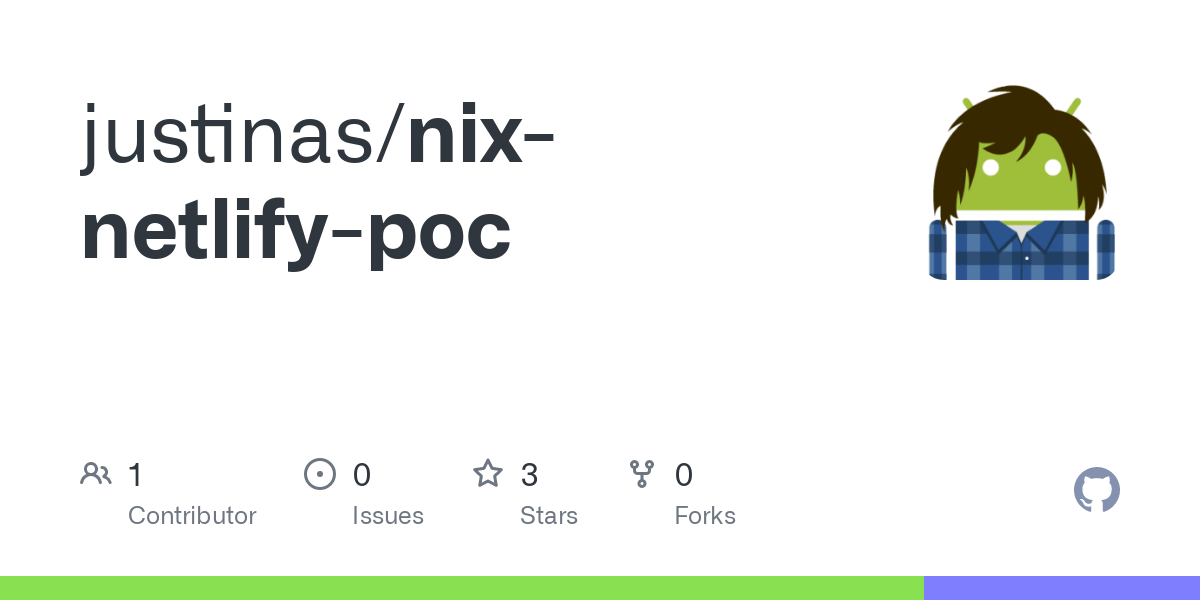 Contribute to justinas/nix-netlify-poc development by creating an account on GitHub.

I was exploring the portable-nix route, and it indeed works. But my build times were 10min, four of which seem to be downloading nixpkgs and evaluating the derivation, then maybe 8 downloading all the build dependencies (granted, GHC and saxonb are not small), and then just a bit doing the actual work.

I tried to speed it up by using a remote builder (nixbuild.net), which was a bit of a hassle (ssh keys too large to fit in the secret env vars, so encrypting them in the repo and storing the decryption key in the env) but in the end that didn’t quite help: It seems that

I might try to throw the nix cache into netlify’s cache, maybe that helps.

I just found out that another feature I was hoping to use in netlify doesn’t actually work, so maybe I’ll cease my netlify experiments, we’ll see.

Hmm, couldn’t get the netlify cache to work, failed for unclear reasons.

Is there really no simple way of building something on a remote builder without having to download build dependencies first? If there isn’t, is there already an issue at https://github.com/NixOS/nix/issues for this (I couldn’t find it).

The nix remote build protocol seems to be a bit limited in several ways.
Since we have flakes now, you could express whatever you want to build as an output of a flake, then ssh to a remote machine, build that flake output there, then copy back the result + closure to your machine. That way you won’t download any build time deps.

A recent change beta in on the nixbuild.net side allowed me to use the following script as the netlify build command, and get reasonable speed in building stuff:

I’m not using it productively yet (mostly because I’m not sure I really like netlify and whether it offers everything I believe I need); maybe I’ll write a more detailed post once I do.

A recent change beta in on the nixbuild.net side allowed me to use the following script as the netlify build command, and get reasonable speed in building stuff

The recent change in nixbuild.net is the support for using --store to run builds without involving the local Nix store, and it was announced today: Lightning-fast CI with nixbuild.net

Hercules CI effects run sequentially, one job after another, where a job is like a commit, so there won’t be such a race condition.